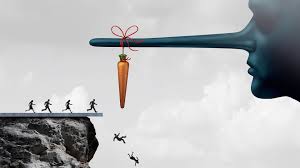 I recently received a letter that appeared to be “official.” It had the clear plastic windows on the envelope you would expect from an official source, a return address saying it was from the “Vehicle Services Department” and in red print, “Important Vehicle Notice.”

Genius that I am, I wasn’t fooled. I knew it was another piece of deceptive advertising mail that comes almost daily. But out of curiosity, I opened it.

In the envelope was an official looking document on pink paper that listed features of our 2010 Nissan Altima. The pitch was for an extended warranty on the car, something that I have determined is a waste of money in any case. The satisfying part of the letter was that we haven’t owned that car for several years and so for the sender, it was a waste of time and money.

We’ve all become so accustomed to such misleading mail and propaganda that we think nothing of it. I wrote about this subject back in February when there was so much publicity about “alternative truth.” I then used as an illustration a telephone solicitation, similar to the misleading – and therefore fraudulent – letter from the “Vehicle Services Department.”

Do these misleading forms of advertising reflect the public climate that appears to no longer value the truth? The pace and extent of public dishonesty appears to be accelerating, mostly due to social media through which people can instantly broadcast rumors, exaggerations and downright lies and move on to more of them before the earlier ones are exposed .

And, wrote Charles J. Sykes in a recent America Magazine article, “…Cable networks, radio hosts and web sites continue to peddle bizarre conspiracy theories even after they have been debunked.” America, by the way, describes Sykes a “conservative commentator.”

Some of you may be thinking, “What does this have to do with the search for God?”

“…One of the most consequential questions we now face,” writes Sykes, “is whether truth matters anymore.” And if the truth doesn’t matter, our search for God doesn’t either.

Sincere believers may differ with non-believers on whether God exists, on the questions of how best to find God or other questions of science, theology or philosophy, but if the truth doesn’t matter, neither do any views on any side.

What are the stakes in the apparent loss of respect for the truth?

The story of the trial of Jesus before Pontius Pilate, the provincial Roman authority in Jerusalem, gives us a hint. In a dialogue with Jesus, in which the procurator was trying to relieve himself of responsibility for Jesus’ death, he asks Jesus, “What is truth?” Implied in the question is that the truth is what Pilate says it is – basically what despots through the ages have wanted us to believe.

It should be obvious to readers of these blogs that there’s something personal about them. I have regularly questioned my faith, believe that most believers do – though they may not be willing to admit it even to themselves – and that writing the blogs helps me and hopefully, my readers, deal with doubt.

I see no conflict between faith and doubt. Like the father of the boy in Mark’s gospel who had convulsions, my frequent prayer is “I believe, help my unbelief.” I think non-believers, and people who have given up on God and religion also have their doubts and that these blogs can help them think through them. All of us must accept uncertainty.

But we still seek the truth. Does God exist? How can we know him/her? What difference does it make whether we do or not? What role does religion play in the search for truth? What can help me in that search?

These are some of the questions I try to help myself and others answer, knowing that no answer is likely to be definitive. But they are among the most important questions human beings can ask. And if we become people who accept lying and deception, such as in the letter from “the vehicle services department,” our search for God should be called off, and, of course, there’s no use reading this blog.