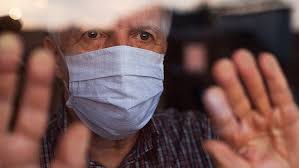 What We See in the Mirror

Of all the media images related to the pandemic, none have affected me more than images of nursing-home residents deprived of visits from loved ones.

Nursing-home residents are often shown sitting in front of a window trying to communicate with a spouse, daughter, son, or friend on the outside. But gesturing through glass is a poor substitute for a hug. Many nursing-home residents, I’m sure, deal with loneliness and isolation just at the time of their lives when they most need love and companionship.

Undoubtedly the images affect me so because I’m of nursing-home age. I could easily be living in a nursing home. Were it not for my current good health, I would probably be there now.

Mirror in the Face of Society

Despite all its harm, the pandemic is placing a mirror in the face of society. For all our heralded internet connectedness, the ease with which we discover and invent new things, and for our scientific advances – including those in medicine – we don’t seem to have advanced much in the humanity department.

Two weeks ago, I wrote about Pope Francis’ new encyclical Fratelli Tuti, or “Brothers All.” And I want to return to the pope’s essay. We don’t want to be, after all, people about whom James wrote in his letter in the Christian Bible: hearers of the Word but not doers, “like a man who observes his natural face in a mirror … and goes away and at once forgets what he was like.”

In his encyclical, the pope expresses his concern about the world’s lack of humanity at a time when it is especially needed. He chalks it up to the ethics of our “throwaway culture,” which includes people as well as things.

“Persons are no longer seen as a paramount value to be cared for and respected,” he writes, “especially when they are poor and disabled, ‘not yet useful’ – like the unborn, or ‘no longer needed’ – like the elderly.

“A decline in the birthrate, which leads to the aging of the population, together with the relegation of the elderly to a sad and lonely existence, is a subtle way of stating that it is all about us, that our individual concerns are the only thing that matters.”

The antidote, writes Pope Francis, is to adopt the attitude of the Good Samaritan, the figure in the famous gospel story. In case you are unfamiliar with it, or have forgotten it, the parable is about a man who is attacked by robbers and left for dead on the side of a road.

But a Samaritan, from the breakaway region of Samaria whose residents were considered heretics and despised by many Jews, “… when he saw him, was moved with pity. He went to him and bandaged his wounds, having poured oil and wine on them. Then he put him on his own animal, brought him to an inn, and took care of him.”

Jesus tells this story in answer to a question by a lawyer, a specialist in Hebrew law, who asked, “Who is my neighbor?” Jesus’ answer expresses in a nutshell how people should relate to each other.

Unfortunately, the reaction of many of us to such gospel lessons is to dismiss them as “impractical” or “unrealistic.” It calls to mind the comment of Thomas Merton, the Trappist monk and spiritual writer, who wrote, “Being realistic is to belong to society – antithetical to being Christian.”

The pandemic provides the opportunity to be a Good Samaritan, to be “moved with pity” for people who are hurting, even if it must be by telephone or social media, or by prayer. One kindness at a time, we can change the mirror image of our era, and by doing so, make progress in our search for God.