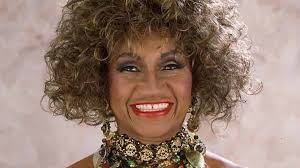 No matter your age, if you’re Latino/a, or like me, personally involved in the life of a Latina, you’re probably a fan of Celia Cruz, the Cuban-American diva who died in 2003 at age 77.

That’s because Cruz was special. Known as the “Queen of Salsa,” she released more than 40 albums over a career of nearly a half century, winning two Grammy Awards and three Latin Grammy Awards.

If you’re not Latino/a, you may have never heard of her and seeing videos of her performances, you may be put off by her outlandish costumes and what one writer calls her “custom-made, gravity-defying shoes.” It’s a cultural thing, I suppose.

But if you want to expand your horizons, take a listen to what is, perhaps, her most famous song at https://www.youtube.com/watch?v=IibNqwndtCE. I challenge you to watch and listen without tapping your foot or moving your body with the rhythm. And to be unimpressed with the message. The translation is below.

Cruz is special for Latinos/as for several reasons. First, most of her songs are so rhythmic and upbeat, you can’t help but feel good after listening. Second, they have an appeal that goes beyond culture and age. The young are just as enthusiastic about her and her music as older people.

But as with all good music and literature, the ability to touch people where they live is what distinguishes the extraordinary from the common. And that’s where she shines, singing songs that resound with the poor, the discouraged, the old and young of the Caribbean and other parts of Latin America and everywhere else.

And none of her songs does that better than “La Vida Es Un Carnaval,” or “Life is a Carnival.

All who think that life is unfair must know that it isn’t, that life is a beautiful thing, and you must live it.

All who think they are alone and detestable must know that they aren’t, that in life no one is alone. There’s always someone.

Many people who are suffering may not agree, but believers, such as Cruz (She grew up partly Catholic and was partly a believer in Santeria, an Afro-Caribbean mix with Catholicism.), know that faith transcends even suffering. In these blogs I have often noted that believers may not be able to justify their faith by appealing to reason. Although faith is reasonable, you can’t prove God’s existence through scientific means.

In my view, faith is like music, art and literature, which appeal partly to reason and partly to emotion. That’s why those pursuits have been so connected to religion throughout history. Some of the greatest musicians, artists and literary figures have been religious and have treated religious themes. And that trend continues in people like Cruz who model Christian optimism in the face of suffering.

Aymée Nuviola, one of two actresses who played Cruz in a 2016 Telemundo broadcast docudrama titled Celia, is a big fan of the woman she depicted.

“She is not only greatness as an artist but she had an immense charisma,” recalls Nuviola. “…She helped those in need… She transmitted happiness and joy and hope.”