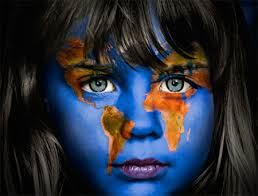 Estranged from our Human Family?

Walking my daughter’s dog in a racially mixed, Denver neighborhood recently, I passed an African-American woman who smiled and said, “I like your dog.”

“Thank-you,” I said, and we both moved on, two ships passing in the night. A momentary encounter of small gestures. She undoubtedly thought no more about it, but I appreciated her friendliness.

I began thinking about what should be obvious: How connected I am to her, despite differences in race, age and economic circumstances. We are contemporaries, living within the same narrow span of a century or so. More basically, we are fellow human beings, with the same basic needs, desires, faults and virtues.

We undoubtedly share some tastes and preferences, but we probably think of our worlds as worlds apart. It’s easier to be conscious of our differences than our similarities. Differences dominate our perceptions of people of different races, religions and cultures, but isn’t it mostly illusion?

Seven of my eight great grandparents are from Ireland. The eighth evidently referred to himself as Scotch-Irish, a descendant of the Scots who were “planted” in Ireland during the 17th century. I know nothing about his family, and very little about all but two of my other great grandparents.

My wife is from a small, remote town in Colombia. She is descendant from people who emigrated there from Spain, and possibly before that, from Italy, several generations earlier. She also knows little about them, and before our marriage, her family and mine were as unknown to each other, and as culturally distinct, as the Tutsis are to the Sioux.

My son and his wife both moved to Chicago, he from Iowa, she from Ohio, after college, where they met and fell in love. I’ve met her family, who are wonderful people, only on occasion. My unmarried daughter, who lives in Colorado, will undoubtedly meet someone whose family will be as unknown to my wife and I as I was to my wife’s family.What’s the point? We humans – especially people of my generation – make a big deal about national, racial, cultural and family unity, feeling a special bond with members of our group, and indifference, sometimes even antipathy toward “outsiders.”

I’m especially proud of my Irish heritage, but not even the Irish in Ireland are of one ancestry. Like Americans, the Irish are a mix of nations and nationalities. There’s no such thing as a “pure race.”

The reality is that people become members of nations and families in the most arbitrary and random ways. People whose culture, religion and nationalities are far apart suddenly find themselves members of the same family or fellow citizens.

That’s why talking about “the human family” is not, as some cynics would have it, a mere feel-good idea. We are all physically, biologically and spiritually related in many ways. Remembering this is especially important for people searching for God

Some people point out that we are “stardust,” focusing on the evolutionary process that began in the cosmos. While our earthly ancestors have been around for about six million years, “modern” humans evolved only about 200,000 years ago.

And, writes Hillary Mayell for National Geographic News, “…Analyzing DNA from people in all regions of the world, geneticist Spencer Wells has concluded that all humans alive today are descended from a single man who lived in Africa around 60,000 years ago. Modern humans didn’t start their spread across the globe until after that time.

As for differences like skin color, scientists believe that major changes can happen in a period of only 100 generations, a drop in the evolutionary bucket.

For all that we make of the differences, the reality is that we’re all much more alike than different. And that’s a basic tenet of Judeo-Christianity, even though many Christians and Jews ignore it.

The Hebrew Bible habitually speaks of humans as the “everyman,” demonstrating humans’ oneness with God and each other. The Genesis story of creation is not an historical account, of course, but a lesson that we all belong to the family of God, who like all parents, has given us responsibilities that we have in common.

“Then God said: ‘Let us make man in our image, after our likeness; and let them have dominion over the fish of the sea, and over the birds of the air, and over the cattle, and over all the earth….” Among the many references in the Christian Bible to our intimate connection to God and each other, none is more significant than Jesus’ response when asked to teach his disciples to pray. Over two thousand years later, many of his followers understandably hold hands as they say that prayer, the “Our Father.”

“God is the hub of the wheel of life,” writes Henri Nouwen, a Dutch-born priest and writer. “The closer we come to God the closer we come to each other. The basis of community is not primarily our ideas, feelings, and emotions about each other but our common search for God. When we keep our minds and hearts directed toward God, we will come more fully ‘together.’”