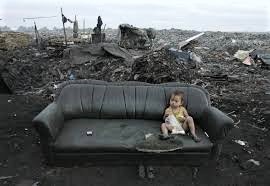 Does God Have a Plan for Our Lives?

I’ve often thought about how we humans wind up where we are, in the physical as well as social and economic senses.

First, how is the family into which you are born determined? Who knows? Then there’s the matter of where and how you live. A company executive for Pittsburgh Plate Glass Co. decided that my father would be manager of a paint-and-glass branch in St. Joseph, Mo. So that’s where my brothers and sister and I grew up. Our economic status was also determined in that way, and we lived modestly, but comfortably.

By contrast, years ago on assignment as a newspaper reporter in Mexico, I visited the main garbage dump in Mexico City to do a story about the nuns – members of Mother Theresa’s religious order – who worked among the people who lived there permanently.

The dump is indescribable. My taxi driver refused to go closer than two blocks, saying the odor was too disgusting and the place too dangerous. I walked from the cab to the nuns’ house and that afternoon, went with a couple of them as they visited people in the squalor of the dump, which I  estimate to have been several square miles in size.

Yes, I wrote above that people actually lived in the dump, as unbelievable as that may seem. Their huts were made of whatever materials they could find. Often it was cardboard.

The nuns took me to visit a man who was dying in one of the huts. Walking the equivalent of a couple of blocks over trash and garbage that included dead rats, we entered the hut, lit by a single bulb (I don’t know how or where he got electricity.), hanging from the ceiling. He was alone, lying on a ragged cot. The nuns brought him water but otherwise simply tried to comfort him.

They explained why people lived there. Garbage trucks arrived daily, at all hours, from various parts of the city, some from relatively affluent areas, some from poor areas. The people who lived off selling and using the garbage and trash wanted access to what came from the affluent areas, so they stayed there day and night to get the best stuff. There were continual fights over the rights to the refuse and a mafia within the dump tried to call the shots on who got what.

How Is It Possible?

So, has God planned all this? If so, how is it possible that God assigned me to middle class parents and a comfortable life in a relatively safe small city and others to live in a living hell like the Mexico City dump?

You can believe what you want in that regard, but I don’t believe God has such a plan. I believe that most of life is random, including one’s birth and how the circumstances of our lives play out. What matters is how we respond to whatever hand we’re played. And I believe people like those who live in the dump have a leg up on the rest of us when it comes to God’s love and any reward in the afterlife.

“Blessed are the poor,” said Jesus in the gospels, “for theirs is the kingdom of heaven.”

The gospels have a lot to say about God’s preference for the poor, in fact. It doesn’t mean that we who are not poor aren’t loved by God, but in my view, it means our relative prosperity doesn’t provide any favorable status as it does in this life. And much depends, in fact, on how we treat those who are poor.

For people searching for God, the other important aspect to the question of the circumstances of our birth and lives is our gratitude to God for what we are and have. We are free to be ungrateful and that reminds me of another gospel story, the one about Jesus curing 10 lepers.

Only one of them – a Samaritan and despised outsider to most Jews – after following Jesus’ request that they go and show their cured selves to the priests, returned to thank him.

“Were not 10 cleaned?” Jesus asks. “Where are the nine? Was no one found to return and give praise to God except this foreigner?”

Life is certainly unfair, like the cards we’re dealt in a poker game, and it would be hard to be grateful for living in a garbage dump. As for the rest of us, we should be embarrassed that we allow our fellow humans to live that way and strive to do something about it. I believe God expects us to make it more fair.

And we who have been spared that life should be especially grateful.