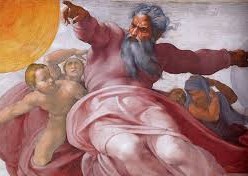 Did God Make Us or Did We Make God?

The first notion is in Genesis, the first book of the Bible, where it says, “Let us make man in our image, after our likeness,” then proceeds to say that humans would have dominion over the earth and its creatures.

The second idea, that humans make God in their image and likeness, is a common refrain of critics of religion.

In my opinion, both are right, but maybe not in the way the critics would have it.

The idea that humans make God in their image is not right in the sense that humans have invented the idea of God. In my view, as I’ve written often in these blogs, there are good reasons to believe in God.

But it is correct in the sense that we humans often imagine God the way we want, not how the biblical and theological evidence portrays God, who in the last analysis is unknowable.

This is true, especially, of many Christians who ignore biblical and doctrinal descriptions of God in favor of a popularized god with whom they can live comfortably, who requires no inconveniences. Such a god requires no changes in behavior or attitude, and above all, doesn’t require us to love God or others.

That God of the Old Testament

If any reference to the biblical God is required, it is that God of the Old Testament who is jealous, vengeful and who punishes in this life, and who has all the negative attributes of humans. It’s not the Father of the Prodigal Son nor the farmer who declined to have the “weeds” pulled from his fields lest the crop be damaged as well.

It’s not the Father whose house is for prayer and not for buying and selling nor the Father who “so loved the world that he gave his only son,” nor the one who knows how to give good gifts to his children.

It’s true that God is sometimes depicted in the Old Testament as a vengeful, violent tyrant who keeps strict tabs on us. But the Hebrew Bible also portrays God as loving and even affectionate.

This is especially evident in the psalms. Think of the most popular psalm, “The Lord is my Shepherd, or Psalm 90 (in Catholic Bibles), which places these words in the mouth of God regarding those who love him.

Since he clings to me in love, I will free him; Protect him for he knows my name. When he calls I shall answer: “I am with you.” I will save him in distress and give him glory.

Will Turn Out To Be Inaccurate

I suspect that whatever we think we know about God will turn out to be inaccurate, making the question that’s asked at the beginning of this blog less important if not meaningless.

The best way to know God, in my view, is through reading and study of the Bible, which is the Word of God in the words of humans, familiarity with the teaching of the Church – which includes the best minds throughout the ages – learning to see God in others, especially the poor, and prayer.

I pray for the readers of this blog, that they come to know God to the extent possible and that, despite any skepticism, they learn to “cling to him in love.”