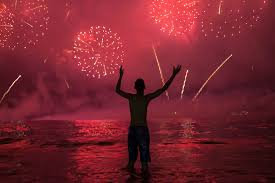 Will the New Year Bring Happiness?

I recall as a youth being saddened by the song, Auld Lang Syne. I’ve read that the title is taken from a phrase in a 1788 poem by the famous Scotsman, Robert Burns. It’s typically sung on New Year’s Eve around the world.”

Among the title’s translations is “Times Gone By.” The only lyrics I knew were barely understandable: Should old acquaintance be forgot, and never brought to mind? Should old acquaintance be forgot, and old lang syne? But combined with its melancholy melody, they were enough to put me in a minor funk. More than anything, I think, it reminded me of the death of my grandmother, Julia Carney, whom I loved dearly, and that one day, I, too, will die.

“Ok,” you might think, “this is getting morbid.” Not really. This blog is actually about happiness, and “happy” and “death” can coexist. But the specter of death, I believe, hangs over the heads of many people like an anvil on a string, and is a major obstacle to happiness. And, contrary to popular belief, it’s not just people my age who think about death. People of all ages, I believe, try to expunge death from their minds.

A Book About Happiness

I’m reading a book about happiness by an English Benedictine monk named Christopher Jamison, who tells the story of a fellow monk who was part of an effort to establish a monastery among native Peruvians in a remote part of that country.

Benedictines aren’t “missionaries,” but because of the great needs of the people with whom he found himself, Fr. Michael Smith spent much of his time traveling to even more remote villages to tend to the spiritual and other needs of the people. He became known for long journeys, requiring his climbing over mountains on foot.

He retired back to England in his eighties, became ill with “inoperable, internal melanoma, the result of living for years in bright sunlight,” and was hospitalized. Jamison broke the news to Smith about the diagnosis.

“Michael,” Jamison told him, “you have climbed many mountains in your life and now you have to climb the highest one of all.” Smith replied, ‘Yes … and the best part of climbing a mountain is the view from the top.’

“So for two months,” writes Jamison, “Michael climbed that mountain with great faith, and during that time his deeply spiritual qualities emerged. During his final weeks, Michael was unable to leave his room and was unable to eat; his life was reduced to the bare minimum. Having been the servant of the least, he himself now became one of the least.

“Yet he retained what had always been the essentials of his life: the broad grin; the prayer; the acceptance of discomfort; the concern for others…. He died as he lived. …In his living and in his dying, Michael knew the joy of contemplating God and the delight of living virtuously.”

Jamison suggests that like his friend and fellow monk “we look death in the face and in some sense conquer it by describing how it might be happy.” And how can it be happy? By the absence of mind-numbing pain; the absence of anger; and a sense of communion with loved ones and with God, he writes.

Monk or not, the closer we who are searching for God get to our goal, I believe, the more we will look at death, ours and others’, not as the worst thing that can happen but as a transition. Few of us look forward to it, but faith, whatever the “amount,” provides the possibility of happiness in the face of death.

The skeptics among us will say that’s just wishful thinking. Maybe. But there are good reasons to believe. Among them, for people searching for God in the Christian tradition, are the assurances provided by the Bible, which if properly understood, is reliable.

“For God is not God of the dead, but of the living. For all are alive to him,” said Jesus in the Gospel of Luke (Phillips translation). And in his letter to the Christians at Rome, Paul wrote, “At every turn life links us to the Lord, and when we die, we come face-to-face with him. In life or death, we are in the hands of the Lord.”

Happiness, of course, is not ultimately about stuff or status. It’s a spiritual condition, and the success of the lifelong task of reconciliation with our death is, I believe, a test of its strength. If we’re progressing in that task, even when contemplating a new year that includes a pandemic and other uncertainties, we can be happy.