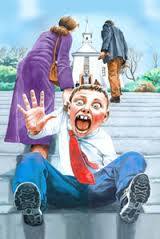 Why Do People Still Go to Church?

A May 2015 survey by the Pew Research Center shows that 23 percent of Americans identified as “religiously unaffiliated,” up from 16.1 percent seven years earlier. And a third of people under 30 answer “none” when asked about religious affiliation. They’ve become known as “the nones,” in fact.

So, is church-going, and belonging to a religion, a thing of the past? I don’t think so.

According to a Gallup Poll published 18 months ago – the most recent such poll I could find – nearly four in 10 Americans report that they attended religious services in the previous seven days, close to where it was in 1940 and 1950. What’s more, an average of 56 percent of Americans said religion is “very important” in their lives, while another 22 percent said it is “fairly important” and 22 percent said it is “not very important.”

The “nones,” the polls show, are mostly millennials, and characteristically, it may be taking them a bit longer to commit.

But why do people still go to church and affiliate with a religion? The reasons, for Catholics, at least, have never been expressed more clearly than in a recent column  in the National Catholic Reporter by Phyllis Zagano, a senior research associate-in-residence at Hofstra University.

(Apologies to my non-Catholic readers for presenting material that is most directly concerned with Catholicism, and to all my readers for such long quotations from another writer.)

Zagano is painfully aware of the clericalism of some clergy, the church’s failure to provide leadership opportunities for women, and the abuse of children by some clergy and cover-ups by some bishops. She is often asked, she writes, “…how can you stay in the dysfunctional, embarrassing, confusing Catholic church, with all its baggage?” She answers in an article entitled, “Why Stay?”

“… I do not belong to a church of good-old-boy camaraderie or to one that looks the other way,” she writes. “I know the criticisms of clergy, and I know not all can or should be criticized. The complaints are not all that different from those about any bureaucracy. The church has grown into a multinational corporation that can rival any other, and it has its own bureaucracy to manage its affairs.

“… But I do not belong to the church of the bureaucrats. I belong to the church that is the People of God who have seen and heard and believe the Gospel. I think the bishops and their priests believe the Gospel. But they are increasingly tangled in the bureaucratic web that complicates their every move and reminds them there’s a lawyer around every bend.

Granted, there are people who go to church and remain Catholic out of habit or a sense of obligation. But there are lots of people like Zagano, who have been Catholics for a long time and want to remain so. But what about people who, though searching for God, doubt that they need religion, especially one as structured as Catholicism?

Because despite wishing it otherwise, structure is indispensable for humans. Although Zagano doesn’t belong to “the church of the bureaucrats,” she acknowledges that the church is an organization, human and divine, and all organizations have structure, and a bureaucracy.

The question is, “how much structure do you need?” The answer may depend on the individual, but I believe most of us think we need much less of it than we actually do.

Can you really be spiritual on your own, apart from the community of believers? Can you be spiritual while ignoring the historical religious figures who “invented” spirituality and the traditions they founded? Even if you’re able to stick to them, can you be sure that your spiritual practices are anything more than exercises in self-absorption?

The idea of spiritually “going it alone” may be culturally comfortable with American individualism but it does little to help avoid self-delusion and self-centeredness. Religion is a communal anchor. It tests our spirituality against time-honored criteria and invites us to be part of a community of like-minded seekers of the spirit.

And though many of its practitioners ignore it, religion challenges us to “walk the walk,” and shows us how to do it. It’s one thing to be spiritual, another to live our spiritual lives in service to others. To me, these two are inseparable.

Like Zagano, I believe these are good reasons to stay, or to join.