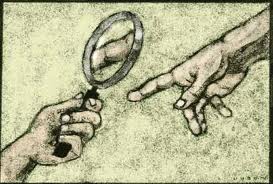 Where is Your God?

Believe it or not, this is a line from Psalm 42 of the Hebrew Bible. It’s a question the author of the Psalm says people ask him “every day.”

The clause is one of the reasons I believe modern readers, removed some 2,300-3,000 years from the time the Psalms are said to have been written, can still relate to them. The Psalms, many of which are poems meant to be sung, express the most universal and timeless yearnings of the human heart.

This quote also shows that atheism and agnosticism, which many of us think of as relatively modern, are nothing new. As long as people have believed in God, people have also doubted. Many of us, including believers, ask the psalm’s question because our God is invisible. Unless you “see” with the eyes of faith – which many of us find difficult – there is, indeed, no God.

But if God exists, how are we to imagine him/her? Many picture an old white guy sitting on a throne amid puffy clouds. Michelangelo, the famous 16th century painter, depicted on the ceiling of the Sistine Chapel a stern, white-bearded man-creature, upheld by a bevy of plump child-angels, pointing a rigid finger at Adam, the Book of Genesis’ first human being. The outstretched finger of Adam, representing humans, is limp.

An episode of Lillehammer, a Netflix comedy series on which I’m hooked, has a scene showing St. Peter behind a reception desk like that in a clinic waiting room. People are sitting in chairs, reading magazines, presumably waiting to be ushered into God’s presence – like patients brought into the presence of their family doc (suggesting that doctors have “God complexes?”)

Artists have struggled to depict God, and theologians have described him/her in such nebulous terms that he/she is even harder to imagine. Besides being invisible, they say, God is outside time and space, dimensions in which human beings are so immersed that we can’t imagine any other milieu.

Still, I find the theologians’ idea more likely, and even appealing. Spiritual writers have often said that when you pray you should “place yourself in God’s presence.” I do that with the start-off prayer, “I believe you are here with me, Lord, in and around me and in and around the billions of people on earth, and that you stretch from here to the limits of the universe and beyond.”

It helps me place myself, and my prayer, in perspective.

Still, I have to acknowledge that ultimately, I know little about God and if I am to be a believer, I have to accept uncertainty, what many spiritual writers call God’s “mystery.” (I’ve never liked that term. It seems like a copout, that you shouldn’t try to figure it out because it’s “all a mystery.” I believe God gave us brains to try to figure out everything we can. God himself/herself, however, may be one of the “things” we simply can’t.)

Tomas Halik, in the book, “Patience with God: The Story of Zacchaeus Continues in Us,” which I’ve quoted several times in these blogs, writes that Thomas Aquinas, the great 13th century philosopher and theologian, wrote that “while it is possible for us to be convinced intellectually of God’s existence, we are obliged to add that we do not know who God s (what he is “in himself”) and how he is, and what the verb “is” means when referring to God.”

“Take care not to think for even a moment that you have gained sufficient insight into his mystery,” Halik writes; “the most you can hope for is to touch him lightly from behind, like the hemorrhaging woman touched the hem of Jesus’ cloak.” (Gospel of Mark, Chapter 5, verse 25)

And that brings us to a clear benefit of Christianity when trying to conceptualize God: the belief that God became a human being in the person of Jesus.

I suspect more has been written about Jesus than about any other person in history, and the topic hasn’t lost its interest among contemporaries. Many books today are about “the historical Jesus.” An example is “Zealot: The Life and Times of Jesus of Nazareth” by Iranian-American author Reza Aslan. A New York Times bestseller, its thesis is that Jesus was a political figure, a nationalist among many like him whose main concern was overthrowing the occupation of the Romans.

Aslan starts out with this idea and tries to prove it throughout the book, but in my estimation, he falls far short. As often happens when such an approach is used, he is selective in picking only parts of the Christian Bible that proves his point, ignoring the overwhelming evidence that disprove it. People who really want to know the historical Jesus should read a real scholar like Raymond Brown and his “Introduction to the New Testament.”

In any case, Jesus provides a remarkable insight into “who” God is, if not “how” he/she is. For starters, he consistently refers to God as “Father,” a hint about how we should think of God – as a loving parent, father or mother. That confirms the “human” aspect of God that we know from the Hebrew Bible, placing a whole new twist on the hazy, indefinite God of the philosophers and theologians.

And knowing Jesus, even from the distance of 2,000 years, helps us “know the Father,” as Jesus himself says in the gospels. Jesus is compassionate, just, and merciful. He rejects the false religion of self-righteousness, superficiality and hypocrisy. He embraces tax collectors and prostitutes, the sick and the lame, those on society’s fringes. He is not bound by normal physical limitations. He urges people to faith and trust.

So, philosophy and theology tell us that the “where” question doesn’t apply to God because he/she doesn’t live in time and space. And the Bible, especially the New Testament for Christians, shows us the “human” side of God by showing Jesus, who lived among us, immersed like us in time and space.