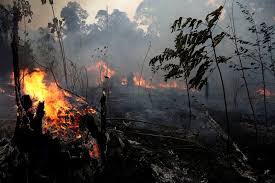 What “Organized Religion” is Doing

Remember when the Amazon forest was on fire? It was only a few months ago, but so many things have happened since – more school shootings, mass demonstrations in Latin America and Asia, the impeachment hearings – it’s hard to remember.

To refresh your memory, the Amazon region burned at an alarming rate last summer. Tens of thousands of fires laid waste to the world’s largest tropical rain forest, mostly in Brazil.

The Amazon is called “the lungs of the world,” absorbing greenhouse gases that would otherwise harm the planet. It also is home to indigenous people who rely on the forest’s resources. But besides fires, much of which are due to global warming, say scientists, the Amazon is being de-forested by rapid commercial and industrial use.

Most responsible for the deforestation, says the site Save the Amazon Rain Forest, are agriculture, mostly cattle, and the wood industry. And in the latter, it’s the illegal cutting that causes the most damage.

What does any of that have to do with the search for God?

If we believe that, ultimately, God is creator who has provided us with our common home and all its resources, we should feel ashamed. Is this how we care for it? And what about the people who suffer – people who are among the poorest on the planet?

So what is “organized religion,” which regularly takes it on the chin for being self-interested and self-promoting, doing? You wouldn’t know because initiatives by religious groups get little to no attention.

Impact on the Region and Its People

That’s why in this blog I decided to write about a major project that few people know about, the recently completed Synod of Bishops on the Amazon, and its possible impact on the region, its environment and its people.

Granted, much of this is a “Catholic thing,” part of which has to do with the church’s religious mission in the Amazon region. But its impact is meant to be broad, addressing the region’s unique problems and the situation of the people who live there.

Only one part of the conclusions of the synod, held in October at the Vatican, received considerable publicity. The bishops recommended to the Pope that married men already serving as deacons be ordained priests. They also recommended that women be ordained deacons. The pope has said he will seriously consider the recommendations, which were immediately attacked by conservative Catholic groups, distracting from the synod’s main recommendations.

But before getting to those, a word about the process. Although the 185 voting members were mostly bishops, the point of the synod was to listen to representatives of its inhabitants – especially indigenous people – and decide what could be done to improve their physical and spiritual lives.

To this end, around 260 events were held in the region, comprising nine countries, to prepare for the synod. Most were listening and consultation sessions, attended by approximately 87,000 people. Those sessions led to the synod’s working document, which guided the process.

As for the main recommendations, the final document, submitted to Pope Francis, defines a new “ecological sin,” and urges the church throughout the region to divest itself from “extractive industries that harm the planet,” according to the National Catholic Reporter.

Ecological sin, says the synod document, “is “against future generations and manifests itself in acts and habits of pollution and destruction of the environmental harmony, transgressions against the principles of interdependence and the breaking of solidarity networks among creatures and against the virtue of justice.”

Many of us are rightfully skeptical of such documents because they are often placed on library shelves to collect dust. But to be ultimately effective, human beings must observe what’s happening and discuss solutions to problems before putting the solutions into practice.

That’s what the bishops, and all the people they consulted, were – and are – trying to do. We’ll see what actions are taken. But whatever stage we’re in in our search for God, how can we not support their efforts?