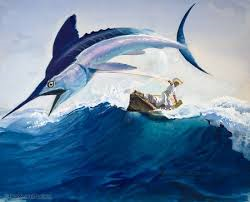 As I was thinking about how to write about trust, I looked out my office window and saw a robin lighting on the topmost branch of a birch tree in our backyard. The tree is at least 100 feet tall. The bird lit there for a few moments, then flew off.

I imagined how terrified I would be if I were on the top branch of a tree that was proportional in size. I don’t do well with heights. But, of course, the robin has nothing to fear because the air is her friend, supporting her wings and her life. She trusts.

I believe that’s a good analogy for trust in God, whose presence is the air under our wings, what keeps us from falling, what keeps us spiritually alive. If only we trusted that that is the case! If we did, we would have the peace that results from faith.

However, writing in Give Us This Day, a prayer book “for today’s Catholic,” published by the Liturgical Press, George Niederauer, former archbishop of San Francisco, says, “We do not believe in a God who is our insurance policy in the sky, or our reliable heavenly ally in all our battles.

“Instead, we place our faith in a loving creator and redeemer who calls us to live in his love and to share that love in action with our sisters and brothers in the human family.”

In other words, God is not a crutch, a comforting anesthetic, as critics of religion claim. Belief requires commitment and effort, but like physical exercise and a good diet, it has its rewards.

Niederauer, who died in May at age 80, refers in his article to the letter of St. Paul to the Philippians in which the author urges us to “have no anxiety at all, but in everything, by prayer and petition, with thanksgiving, make your requests known to God. Then the peace of God that surpasses all understanding will guard your hearts and minds in Christ Jesus.”

Another analogy for this kind of faith can be found in the famous novel “Old Man and the Sea” by Ernest Hemingway. It’s been years since I’ve read it, so I checked an on-line synopsis to refresh my memory.

What I remember is the old man’s tenacity in trying to catch a huge marlin in the Straits of Florida. From what I recall, he knew from the signs of its presence the fish was on his line but hadn’t actually seen it. His struggle with the fish required faith in himself and in the worthiness of his struggle to catch a fish so big it would reverse his misfortunes. He hadn’t caught a fish in 84 days.

What I had forgotten was that although the old man, named Santiago, eventually catches the fish, he must latch it to the side of his boat because of its size and before he can get it to shore sharks consume most of it. Like in our search for God, his feat – the biggest catch of his life – is incomplete, his accomplishment only partial.

But Santiago is reinvigorated by the battle itself, earns the respect of other fishermen who once mocked him and gains the loyalty of his apprentice fisherman, Manolin, who will carry on Santiago’s teachings long after the old man is dead.

All this may sound depressing to some. A lifelong search with the likelihood of only partial success? What’s the point?

There are lots of them, but among the most important is that the search for God – as mentioned in last week’s blog – is a search for truth. Presumptions, especially those based on trendy views about God, won’t do. And “the truth will set you free.” Second, the search itself, like Santiago’s struggle with the marlin, has its rewards. Among them is a growing trust in the God who may be calling us to the search.

As we progress, perhaps slowly, with two steps forward and one back, we who search for God strive to become progressively more god-like, and this may be the principal reward.

In another letter, this time to the Christians at Ephesus, an ancient Greek city, Paul – a prisoner in Rome, according to tradition – writes:

“I, then, a prisoner for the Lord, urge you to live in a manner worthy of the call you have received, with all humility and gentleness, with patience, bearing with one another through love, striving to preserve the unity of the spirit through the bond of peace….”