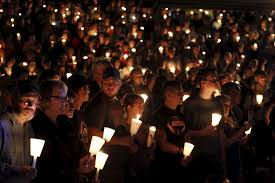 Searching for God in the Midst of Conlict

I know how nerdy this sounds, but as a child I used to watch ants, particularly the black and red ants that occupied the territory around a big tree in the parking near our front yard.

The black and red ants were obvious enemies, frequently engaging in battles to the death. Though the red ants were about half the size of the black ants, the red ants sometimes got the better of the battles. And sometimes, when the two sides appeared to be at peace, I would try to stir them up by placing a black or red ant among those of the opposite group.

It was great entertainment. We had no TV.

My intervention was what some people would describe as God-like. Though we often want to pin our human failings on God, the God of Christians and Jews is nothing like that. How much, if any, culpability may we assign to God for what’s wrong with us and our world? And how should people searching for God react to conflict?

Conflict is, of course, as proper to humans as harmony. We all see things differently, making conflict inevitable and even necessary. Jesus was involved in plenty of conflict. The challenge for people searching for God, including those who wish to follow Jesus, is to engage in conflict while continuing to love. Some adaptation of the old adage, “hate the sin and love the sinner,” applies.

Regarding the ants, anyone who watches nature documentaries as I do knows that the world is full of “natural” conflict: a fish is peacefully swimming in a stream when an eagle swoops down and takes it to its nest where the fish is torn to pieces; the cheetah runs down an antelope and goes for its neck; the purple martin dive bombs a moth in your back yard.

And, of course, we humans are among the greatest of predators. We regularly, and in great numbers, kill and eat other animals.

How is it that a compassionate God included the cruel mechanism of predation in his/her evolutionary creation plan? We don’t know. But as unpopular as it is to make such distinctions today, it seems that God had a different plan for humans than he did for other animals. About the most we can say – as my brother-in-law is fond of saying – is, “It is what it is.”

For much of nature, it’s truly a dog-eat-dog world. But that’s how many would describe the world of humans as well. Note the mass shooting on Oct. 1 in Las Vegas. As of this writing, 58 people died and over 500 were wounded, the deadliest mass shooting in American history. I doubt the record will last long, and people searching for God may ask, “How could a good God allow it?”

Mass murder isn’t part of the plan of the God in whom I believe. This madness falls squarely on our shoulders. What have we done to ensure that people with mental illness and addiction receive proper treatment? What have we done to reduce the likelihood that potential mass murderers, or any murderers, get their hands on weapons? How easily do we forgive, treat others justly and take them seriously, and truly love our neighbor?

Mass shootings such as that which occurred in Las Vegas are dwarfed by the other horrible things humans have done to each other. The holocaust in Nazi Germany and the killing fields of Cambodia come to mind. Those “events” took the lives of millions of innocent people.

When it comes to human-made as well as natural disasters, maybe the more relevant question isn’t “How can God allow it?” but “How can we allow it?”

Are we off the hook in culpability for disasters such as those occurring recently due to hurricanes, earthquakes and fires? How much is due to human activity and neglect? How many people die because of our lack of rapid response? How well have we taken care of the earth?

Back to mass murders, we have free will, so how can we expect God to allow us our freedom and for God to control our behavior at the same time? How can we be free if we want God to constantly intervene in our lives and our world? Why do we blame God and exonerate ourselves?

So if we don’t expect God to intervene, why pray?

If God can create the world, he/she can intervene, and I believe he/she has done so. How does God decide when and where he/she will intervene? We simply don’t know. We aren’t promised the ability to understand God’s ways. Our challenge is to believe and, as the psalmist says, “cling to him/her in love.”

What we do know is that prayer, including prayer of petition, is a mainstay of the earliest traditions of Judaism and Christianity. And people who pray say it does them a world of good, even when their prayers are apparently not answered.