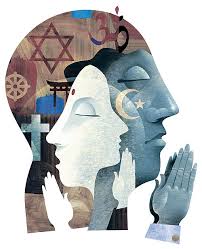 Religions: Are They All the Same?

Many people searching for God undoubtedly find the multitude and diversity of beliefs claimed by “people of faith” confusing, and even irritating.

According to Wikipedia, there are approximately 4,200 religions in the world, and the United States has a concentration of them, more than any other country. The Encyclopedia of American Religions lists 1,584 “religious organizations” in the U.S. and Canada.

When you consider that the population of the U.S. is about 319 million, and our country has a tradition of independent thinking and individualism, that number isn’t so surprising.

Still, it results in bewilderment for many people searching for God. Which religion, if any, is right, or right for me? Why can’t believers agree on who or what God may be and on our relationship with him/her? Couldn’t Christians, at least, agree about Christ and what he taught?

It just so happens that next year will mark the 500th anniversary of Protestantism, when in 1517 the Augustinian monk, Martin Luther, wrote his bishop to complain about the church’s sale of indulgences and included 95 theses on various other abuses in the church. In a relatively short time, the revolt he started got away from Luther, leading to unwanted changes by reformers in his own circle, then by reformers in other European countries.

I’m currently reading a new biography of Luther called “Martin Luther: Visionary Reformer” by Scott Hendrix, emeritus professor of reformation history at Princeton Theological Seminary. It answers some of the questions mentioned above.

But first, a brief reflection on the significance of Luther for people searching for God. First, Luther’s objections to the Catholic Church were relatively limited but greatly expanded even during his lifetime, but I don’t believe he could have imagined the explosion of religious diversity that followed.

Second, it took the Catholic Church centuries to reform along the lines Luther suggested, but the result is close to what I believe Luther had in mind and I doubt he would have many objections to the post-Vatican II Catholic church.

Third, Luther, the relatively obscure theology professor from Wittenberg, Germany, made a unique and immense contribution to our image of God and our relationship to him/her. He was an incredibly productive writer, speaker and biblical translator.

But back to the questions above, starting with which religion may be right for you. It is, of course, between you and God, but I believe the most obvious is the faith you may have been born into. God may have had a hand in that. You may have objections to it, but have you really done all you can to understand and appreciate it?

Secondly, humans can’t agree about God and his/her relationship to us because we’re humans. It shouldn’t be surprising that we would have various views on this topic as we do about most everything. As for the question of Christians, the same applies. However, Christian denominations may be closer than you think. We agree to a great extent about the basics, and that includes Catholics and Lutherans.

Luther’s immediate target was indulgences, which in Catholic teaching reduces the amount of punishment for sins. In Luther’s time, they were being “sold” to help with, among other things, construction of St. Peter’s Basilica in Rome. But his main concern was “justification.” He insisted that humans are “saved” through faith in Jesus Christ, not through their own efforts.

Few people today are concerned about this issue, but it was very much on the minds of medieval theologians. In 1999, Lutheran and Catholic leaders made a “joint declaration on the doctrine of justification” which demonstrates their agreement on most issues surrounding the question.

And Pope John Paul II, in a number of addresses, “spoke endearingly of Luther as a spiritual pilgrim, a doctor of theology, a man of profound religiosity and a man with a positive impact on religion and culture in Europe.” Luther would be shocked to hear a pope speak about him in such positive terms.

Say what you will about “tribal” disagreements and unfathomable theological issues; many  say that the bottom line is that all religions are the same.