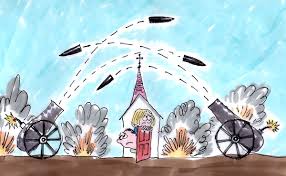 Must You Be a Soldier in the Culture War?

David Brooks, the famous columnist for the New York Times who often appears as a commentator on TV news shows, recently wrote a column called “The Benedict Option.”

An apparently non-practicing Jew, Brooks often writes about faith, usually in a way that suggests that, like many of us, he is searching for God.

Anyway, Brooks writes about his friend, Rod Dreher, whose new book, “The Benedict Option,” is already “the most discussed and most important religious book of the decade.” According to Wikipedia, Dreher is senior editor at The American Conservative and is a frequent commentator on National Public Radio and other media. Raised a Methodist, he converted to Catholicism in 1993 and to Eastern Orthodoxy in 2006 after writing about the sex-abuse scandals among Catholic clergy.

Dreher, writes Brooks, says it’s futile to keep fighting the culture war, because it’s over, presumably meaning that anti-religious forces have won. Instead, believers should follow the model of the sixth-century monk St. Benedict, who set up religious communities as the Roman Empire collapsed around them.

Like monks, Dreher believes, “Christians should withdraw inward to deepen, purify and preserve their faith. They should secede from mainstream culture, pull their children from public school, put down roots in separate communities.”

Brooks maintains that Dreher errs in thinking that Christians are under attack by most Americans, and I agree. Around 77 percent of Americans identify as Christians, and though there may be a bit more public criticism and hostility shown to Christians than, say, 30 years ago, it’s nothing compared to the hostility suffered by Muslims and Jews.

“By retreating to neat homogeneous monocultures,” Brooks argues, “most separatists will end up doing what all self-segregationists do, fostering narrowness, prejudice and moral arrogance. They will close off the dynamic creativity of a living faith.”

I’m a fan of monasticism, but it’s not for everyone. It’s a special vocation. And I disagree with Dreher as well about his position that the culture war is over. It is still clearly being fought in Congress and state legislatures and among people with strong opinions about social and political issues.

As I wrote in a blog a few years ago, the “culture war” is generally taken to mean the war between those who are conservative/traditionalist/rightists and those who are liberal/progressive/leftists. The “battles” are over abortion, same-sex marriage, assisted suicide, and to some extent, the “welfare nation,” “big government,” and gun politics.
What’s important here, in my view, is that people searching for God refuse to base their ethical/social views on whether they conform to liberalism or conservatism. In some areas they may happen to conform to one or the other – may happen to lean toward Republicans, Democrats or Independents – but what defines people searching for God is the extent to which their opinions and actions conform to the object of their search.

We may use the terms liberal and conservative easily when talking about the relationship of faith to issues of the day, but are they really applicable? Religion is not an ideology, let alone a political faction or movement. It’s a relationship – to God and others – which is typically expressed in a particular denomination, the obvious way to conduct one’s search for God.

People who look to their political parties or cultural-war affiliations for guidance on moral issues have a hard time being believers. They will complain that religion is being “too political” when it weighs in on social justice issues or issues surrounding human sexuality or reproduction, as if faith should be excluded from some aspects of human life.

Or they will resent people of faith who publicly express themselves on the issues, as if a religious motivation is excluded from the democratic process. Indeed, you often hear that people of faith are “cramming their religious beliefs down other people’s throats,” as if people motivated by politics or ideology are not.

People searching for God in the Judeo-Christian context must base their political and social views on the Bible and their tradition’s teachings, not on whether they agree with the views of President Trump, Paul Ryan, Nancy Pelosi or Elizabeth Warren. And they must always do so with respect for others’ opinions and tolerance for diversity.

To paraphrase Pope Francis, people searching for God shouldn’t think of themselves so much as soldiers in the culture war as caregivers in political and social field hospitals.