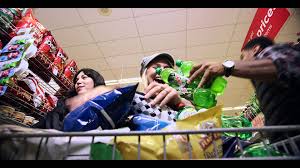 My sister, Carolyn, likes to tell this story about me when I was a newly-married householder, but she may not remember it as I do.

She was visiting as my wife, Amparo, and I were trying to furnish our $120-a-month apartment in a rural Iowa town where I had landed my first newspaper job.

I was still in re-entry mode after over three years in rural Bolivia, where near our house in LaPaz, I saw people competing with dogs for scraps at garbage piles. I hadn’t become accustomed to what I saw as my country’s radical consumerism.

We had gone to the K-Mart in a larger, nearby town, a store that I saw as perfectly representing consumerism. With its garish overhead fluorescent lights and ever-present, non-descript canned music, it had millions of products. I felt confused, detached and a bit angry.

To be honest, I may not have been too happy about the whole idea of “going shopping,” not one of my favorite pastimes. But the K-Mart experience I found to be especially annoying. We were looking at window shades, and I was frustrated by the need to decide among so many choices.

Just as I was trying to help make a decision, a blue, rotating light began to spin on the ceiling near us and a loud, animated voice announced the arrival of the “blue light special.” That did it. I threw down the window shade I was holding and tramped out of the store.

Ok, so I may have overreacted – and I’ve now grown accustomed to the K-Marts, Wal-marts and Targets – but I believe that U.S. consumerism was out-of-control then and is even more so now. It is, in my opinion, a major distraction for people searching for God and a barrier between us and an appreciation for the plight of God’s poor.

Life’s blue-light special is the discovery of God’s love and generosity. Just think what it would mean if we took God seriously. The antithesis of a K-Mart experience, we would feel God’s presence and have peace – with ourselves and others.

Let’s face it, we’re inundated with consumer messages, so much so that we’re mostly unaware of them. I watch a lot of baseball, and baseball broadcasts are among the worst on TV in the number of ads per program. Three or four ads are crammed into each half inning of a nine-inning game. And ads fill the screen during every pitching change, every time there’s the slightest break in the action.

Ads are almost always manipulative. In a review of his new book, “The Market as God” in the National Catholic Reporter, Harvey Cox – among the country’s most famous and respected Protestant theologians – writes that our veneration of stuff is among the modern substitutes for religion. Unlike religion, however, ads engage only our emotions.

Cox is paraphrased as saying that “the quick delivery of multitudinous digital images and messages to our brains via televisions, tablets and cell phones communicates to our emotional selves rather than to our analytical and reflective selves.”

Ads target our weaknesses, not our strengths. If you have any doubt where young people AREN’T getting their news these days, tune in to a network evening news program. An overwhelming amount of advertising is from drug companies, appealing to older audiences.

The ads don’t explain the nature of the drug or even tell you why you need it. That would elicit a rational response. No, they generally show older people playing in a swimming pool, throwing a ball on a beach or running a marathon. The idea is that the drug being pedaled will keep you young and help you avoid death.

“…The market has taught us to speak the language of feelings and to imitate the people we see in our mass media,” the article says.

So, what’s so wrong with consumerism and what does it have to do with the skeptic’s search for God?

Worship of False Gods
Consumerism is the modern version of the worship of false gods, condemned so vehemently in the Hebrew Bible. It distracts us from the search for God and replaces the quest for God-like values with the pursuit of stuff.

“The great danger in today’s world, pervaded as it is by consumerism, is the desolation and anguish born of a complacent yet covetous heart, the feverish pursuit of frivolous pleasures, and a blunted conscience,” writes Pope Francis in his encyclical “The Joy of the Gospel.”

“Whenever our interior life becomes caught up in its own interests and concerns, there is no longer room for others, no place for the poor. God’s voice is no longer heard, the quiet joy of his love is no longer felt, and the desire to do good fades.”