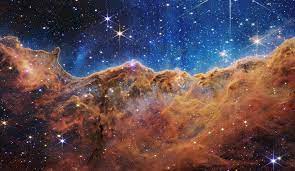 I’ve been impressed by the new pictures of outer space taken by NASA’s James Webb Space Telescope. They capture a beauty that, given the cold, barren nature of space, is hard to imagine. From the viewpoint of a believer, it’s especially hard to imagine – as my faith asserts – that God is present even there.

The pictures initiated, for me, a series of mostly random thoughts about belief in God, formation of the universe, faith and doubt. The thoughts are highly personal, of course. I recognize that everyone has his/her own ideas about these subjects.

I offer mine because the point of these blogs is to attempt to help other people who are searching for God, especially those who may have given up on God and/or religion.

I must say that it’s harder than ever, at least in my lifetime, to be a believer. That’s partly because many of the “external” supports for religion are disappearing. There are many more public attacks on religion. And though more people are educated in such fields as science and technology, very few seem to be interested in “the eternal questions” of the whys of existence. They seem to be more focused on the superficial. And healthy skepticism seems to be losing out to cynicism.

Not All the Same

Then there’s the media, which is the target of the political left and right. For me, there are media, then there are media, meaning that they are not all the same. And for me, the “social media” and non-traditional media are rightly blamed for the worst of media distortions of reality.

A headline on a recent web-browser page, for instance, reads, “Is America on the Path to Civil War?” Really? It appears that Americans are more divided, at least politically, than ever, but civil war? Not even close, and this kind of headline makes things worse.

It also appears that we’re returning to the dominance of partisan media of 150 or so years ago, when many newspapers had “Democrat” or “Republican” as part of their names. As a former newspaper man, I believe it’s true that “the media” in general now show a greater tendency toward sensationalism. There is greater meaningless scrutiny of the minutiae not only of people’s actions, but of their motives. More people seem to be complaining and getting attention for it. And there is less distinction between news and advertising (which, perhaps more realistically, is called “propaganda” in Spanish.).

Yikes! What gloom and doom, you might say. But, of course, a lot about modern life is good. Advances in technology; communications and science are making life safer and easier.

Furthermore, it’s remarkable how people come to each other’s aid, especially in times of crisis. And the generosity shown by some people is no less than incredible. An example is that of my old boss at the Des Moines Register, Michael Gartner, who recently sold his minor league baseball team and shared the proceeds with the team’s 23 full-time employees, costing him and a few minor owners, $600,000.

So, back to belief in God, formation of the universe, faith and doubt. I understand the views of the critics of belief in God. Where is He/She? Why doesn’t God simply reveal Himself/Herself? How can God allow the evil in the world? These are a few of the questions for which we believers have answers that fail to satisfy many people.

But for me, the traditional arguments on the universe’s need for a prime mover and an uncaused cause, plus the arguments for the genuineness and reliability of the Bible and the witness of billions of believers – many of whom gave their lives for their faith – hold a lot of weight.

Also, an argument that strongly resonates with me is what I would call “the argument from beauty,” which brings us back to the NASA space pictures. How is it possible that such a beautiful universe, especially such a beautiful earth, could have been produced entirely at random? The Big Bang explanation, in my view, doesn’t cut it. As I’ve read somewhere, it’s like a random explosion happening here on earth that “miraculously” produces the Library of Congress.

So, I believe, albeit with doubt, that God is present even in the cold, impersonal environs of outer space, as well as being intimately present to every human being.