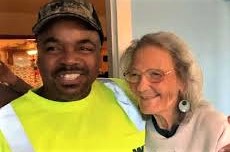 I recently came across an online video that moved me. A sanitation worker – among people I’ve noticed who are always in a hurry – shows patience, kindness and affection for an elderly woman, helping her back to her garage door with her trash container. You can watch it for yourself at https://www.youtube.com/watch?v=oowdKSyuCqc.

Why was I moved? Partially because I think I’ve bought into the idea that kindness is dead. I think that perception – that people no longer go out of their way for others – is common.

When I give it more thought, I realize that the vast majority of people who I encounter in my life are also kind and compassionate. My wife, Amparo, and I recently returned from a trip to Ireland and were struck by the universal kindness shown us – not just from family members but from clerks, hotel employees, rental-car people, people who owned the cottage we rented, employees in petrol stations. We didn’t encounter one rude or impolite person during the whole 10-day trip.

That made me ask myself about Americans and how they compare. It’s completely unscientific, of course, but I believe Americans are no less kind and compassionate. We may just be a little less laid back than the Irish. And since Amparo and I travel fairly often to Colombia, we can say the same about inhabitants of that country, leading to the belief that the vast majority of people in the world are kind and compassionate.

I’m reminded of a story I read about bicyclists Jay Austin and Lauren Geoghegan, both 29, who quit their jobs in Washington, D.C. to travel around the world. Their blog describes the kindness and generosity of strangers as they biked through Africa, Europe and central Asia.

“Badness exists, sure, but even that’s quite rare,” wrote Austin, quoted on the National Public Radio web site. “By and large, humans are kind. Self-interested sometimes, myopic sometimes, but kind. Generous and wonderful and kind. No greater revelation has come from our journey than this.”

Ironically and tragically, the couple, who had been on the road for just over a year, were brutally attacked in July of last year along with two other bicyclists while biking through Tajikistan. A car swerved to hit the group, then assailants jumped from the car and stabbed the bikers. Austin and Geoghegan died. The Islamic State claimed responsibility.

Some might say that this disproves the couple’s opinions about kindness. I disagree, and have a feeling that Austin and Geoghegan would, too. The Islamic State and others of its ilk are outliers, flies in the ointment.

Unbelievably, I found this article on “How to Be Kind” on the web site, WikiHow, which normally tells people how to tie their shoes or fix their computer problems.

Bringing Meaning to Our Lives

Being kind, the article says, is an important way of bringing meaning to our lives and bringing joy to the lives of others. Being kind allows us to communicate better, be more compassionate, and also to be a positive force in people’s lives. ”Kindness has its true source deep within you, and while some people are innately kind, it’s something that everyone can cultivate by choice.”

As I’ve written before, kindness has everything to do with the search for God. It’s a key to the search, in fact. It not only reflects a person’s God-likeness but helps us be more God-like, and that bolsters a budding – or dormant – faith.

The older I get the more I regret the times I haven’t been kind and the more I become conscious of how what I say and do can negatively affect others. Kindness, I believe, is based on our view of others. All of us can view others as fellow travelers on planet earth, worthy of our respect and compassion. Christians can also view others as brothers and sisters.

I think that’s why I was so moved by the sanitation worker in the video. He was a brother – or maybe son – to the elderly woman, joyfully helping her with a task that was small for him but great for her. I’m sure he made her day and brought hope to the millions of people who will have watched the video.