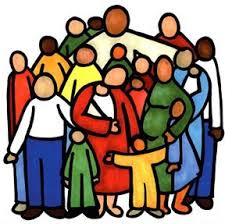 How We Think of “Church”

At a recent weekend liturgy at the Jesuit church of St. Ignatius of Loyola in Denver, the church’s pastor, Fr. Dirk Dunfee, confided in his congregation during a homily about the confusing disconnections in his own family.

His mother had two sisters, only one of whom was close to Dunfee and his family. The other, for a reason unknown to Dunfee, was never spoken to, or about. When the aunt who was close died, Dunfee’s family and the family of the estranged sister were on opposite sides of the room at the funeral home and spoke not a word to each other. And Dunfee said he has lost touch with that family, leaving him with no relationship with his cousins, the children of his estranged aunt.

Many families have experienced something similar. Nothing is more precious than having a close, loving family. And nothing is bitterer than discord and animosity within a family.

I’ve often thought about “church” in this way. It may be a stretch for some to think about church as family. Like government, we may think about “us” and “them,” not about the government as “us,” as suggested in Lincoln’s famous “of the people” phrase. And we seldom think of church as “us.”

This may be one of the reasons the “church” holds so little attraction for so many, especially young people. The sense of a warm, loving community where God is found is often missing.

That’s certainly not the case of Dunfee’s parish. Few parishes are more diverse – with Africans, African Americans, Hispanics, and Asian-Americans generously in the mix. Indeed, the parish was originally formed by Black Catholics, and the sense of community now is palpable. The large, traditional church, dating from 1924, was full on the weekend we were there and included young and old, families and singles, and yes, lots of millennials.

The phrase from the 1989 movie, Field of Dreams, comes to mind. “If you build it, (they) will come.” That is to say, if you build it a community of believers where God’s presence is felt, they will come.

It doesn’t hurt that Dunfee, in his calm, soothing voice, before Mass begins, says something like, “You are welcome here. No matter your language, your race, your color or who you love.”

Years ago, a young co-worker confided in me that she no longer felt part of the Catholic Church, that she didn’t feel comfortable in the church in which she grew up. I asked her if she ever thought about the church not as a building or an organization nor the clergy or hierarchy that runs it, but as a family. She hadn’t, but that way of thinking about church appealed to her.

I admit that’s not easy. But it is certainly a historical and theological way to look at church, as evident in the Acts of the Apostles, said to have been written 60-110 years after Jesus’ death. “Now the full number of those who believed were of one heart and soul, and no one said that any of the things that belonged to him was his own, but they had everything in common.”

Isn’t that the description of a family, where people share a love and loyalty stronger than any community bond and also share the important things like shelter and resources?

Often, people become disillusioned with their family over issues they leave unresolved, and that’s true of “church” as well. We’re scandalized about the clergy abuse of children; bored by church services; unable to see God in other people in the church. We don’t address the issues by talking to someone who could help or doing some study about what’s causing the issues and how they can be, or have been, resolved, let alone take part in resolving them.

And we don’t consider church as family, which may have a “weird” Uncle Phil you wouldn’t trust with your kids, where gatherings are sometimes boring, or where we don’t always feel welcome by everyone. But family is always family.

In my view, people searching for God need church just as I believe people need family. I recommend searching for a community of believers you can see in that way.