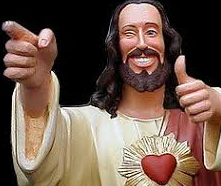 I have a friend who recently posted a beautiful quote online from a famous eastern mystic. I liked it, but it occurred to me that he would never post a saying of Jesus. It just wouldn’t be cool!

Why? This is pure conjecture, but I believe that one of the principal reasons is that Jesus has become so connected with the Christian right, his appeal has been lost to many people who don’t place themselves in that category.

A Pew survey last year found that “religious teachings” are the top reason many adults answer “none” when asked about their religious affiliation. That reason has been around a long time. But, the survey found “the second-most-common reason is opposition to the positions taken by churches on social and political issues, cited by 49 percent of respondents.”

There are, of course, many cultural and personal reasons, but there’s little doubt that more people than ever find Jesus uncool. Pew found that when asked about their religion, only 65 percent of American adults describe themselves as Christians, down 12 percentage points over the past decade.

“Meanwhile,” the Pew article says, “the religiously unaffiliated share of the population, consisting of people who describe their religious identity as atheist, agnostic or ‘nothing in particular,’” is 26 percent, up nine percent since 2009.

In the category of religious practice, the U.S. is finally beginning to match the religious indifference that has been a part of European culture for decades.

But back to the political correctness of quoting an Eastern mystic and not Jesus. Eastern religions, such as Hinduism and Buddhism – as “practiced” by many Americans – are often vague ideas, unconnected to institutions, and impose no commitment and few, if any, requirements. For many Americans, they are more outlooks on life than religions.

For me, Jesus’ lack of popularity in today’s society is puzzling. Jesus is the ultimate defender of the underdog, which should mesh with democratic ideals. He preached love and compassion, virtues that coincide with declared progressive ideals. He urged people to be peaceful and calm in the face of trouble, similar to what modern psychology attempts to do.

A pet theory of mine is that part of the problem is the current lack of interest in history, and Judaism and Christianity are historical religions. Without an historical perspective, it’s hard to understand, and appreciate, the modern versions of historical religions. More than any time in my lifetime, there appears to be a pervasive disinterest in the past and the reasons behind the past’s norms.

Apart from the research on the subject of religious belief and practice, I continue with the view that the main factor behind current disinterest in religion is summed up in the question, “Who needs it?” and its corollary, “I can live perfectly well without it.”

But can we really? Won’t the importance of questions about the meaning of life ultimately catch up with us? Is existence really random? And isn’t it shallow to perceive Jesus as uncool?

For most people, study and prayer, especially with others who are searching for God, make answers to those questions clearer.