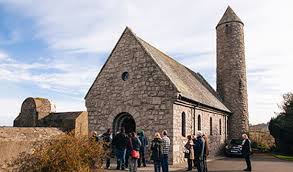 Hard Times for the Irish Church

My wife, Amparo, and I went to church last Sunday in a tiny village in County Clare, Ireland.

As we drove into the village, called Mullagh, for the 11 a.m. Mass, we were impressed by the big, old stone church and the large number of cars parked along the street and in the church’s parking lot. Although the church wasn’t full, there were some 150 people there, seemingly a good crowd for such a small place.

But just as we were about to enter the church, a man told us that there would be no priest or Mass. Instead, laymen and women would conduct a Liturgy of the Word and a communion service.

The church’s pastor, I was told – who with a couple of part-time priests, serves three rural churches – wanted the people to get used to the idea of not having a priest and to learn to conduct a service themselves. The priests of Ireland are all middle- to old-aged and there are few seminarians “in the pipeline” to replace them.

It was the first Sunday of the experiment, I was told, and the priest would return the following week. The people seemed to take it in stride. One of them told me that the number of people there was about the same as for Mass, and people participated – singing and praying together – as usual.

But the no-priest trend is one of many signs the Catholic Church in Ireland is in trouble. As most people know, Ireland has been among the most Catholic of countries, historically supplying thousands of priests for many parts of the world, including the U.S. According to an article last year in America magazine, more than 90 percent of Catholics in Ireland reported attending Mass at least weekly in the early 1970s. Recent surveys put that percentage under 35.

Being Irish once meant being Catholic, just as being Scandinavian meant being Lutheran, Greek meant being Orthodox and British meant being a member of the Church of England. As in those countries and their traditional faiths, most Irish are now only “culturally” Catholics – in my opinion, a poor substitute for investing heart and soul.

In my view, there are two main reasons for the church’s hard times. The first is the secularization that has occurred in Europe for at least 75 years. It came late to Ireland. Church attendance in most western countries has fallen sharply and it was inevitable that Ireland should feel it as well.

The second reason isn’t unique to Ireland, either, but seems to have had a more severe effect here than in other countries. The clergy abuse of minors and its cover-up appears to have had a devastating impact on people’s respect for, and confidence in, the church.

Unlike many other countries, Ireland had several sensational cases of abuse by nuns as well, particularly in convents that traditionally cared for women having babies out of wedlock.

“They’ve done it to themselves,” one man at the Mullagh service told me, referring to the Irish clergy and the decline in vocations to the priesthood and religious life. He seemed pessimistic that the church could recover, whereas a man next to him expressed optimism that the church would survive, just not in the form it has taken in the past.

The expression “shooting yourself in the foot” comes to mind, except that this is more like a shot in the abdomen, where survival is less certain.

An Irish couple not at the service openly talked about their “moving away” from Mass attendance, a direct result of the clergy abuse. They seemed a bit angry, even bitter, and exhibited no interest in renewing their connection with the church.

As we sat in the big church in the tiny village of Mullagh, I thought about the historic struggle of Irish Catholics to maintain their faith in the face of humiliation, persecution, property confiscation and denial of civil and human rights under the British penal laws. Ironically, it seems, Irish Catholics are having a harder time overcoming their own bitterness and indifference.

In the village of Milltown Malbay, I asked an 88-year-old retired priest his opinion of the church’s future.

“Ah,” he said, “the church has gone through much worse. It’s all in God’s hands.”