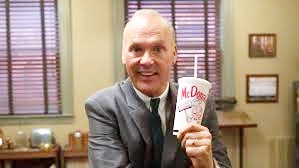 In a scene set in the mid-1950s in the movie, The Founder, Ray Kroc tells the McDonald brothers, the real founders of the fast-food giant, that eating at a McDonald’s should be “like going to church;” that nothing beats the beauty of American families sharing the meal of “a great product at a great price.”

Michael Keaton, who played the part of Kroc, dripped insincerity and cynicism. Kroc ended up stealing the business from the brothers, who had started the innovative hamburger shop in San Bernadino, CA. In the process, he identified Christian and heroic values with American capitalism and in real life, Kroc was honored by President Ronald Reagan.

Unlike Kroc, the McDonald brothers’ keen sense of ethics wouldn’t allow them to do virtually anything to “succeed.” Kroc did what he did because, having gained the upper hand legally, he could. The McDonald brothers faded into history, undoubtedly viewed by many as “losers.”

If Kroc ever felt an ounce of guilt about what he did, it wasn’t presented in the movie.

Contrast Kroc’s story with that of David Crosby, known in the 1960s and ’70s as a collaborator with some of the biggest bands of the time and interviewed recently on National Public Radio. He was a founding member of The Byrds and is perhaps most known for his involvement in the folk-rock group, Crosby, Stills and Nash.

His personal life was filled with breakups, addiction and criminal activity. Convicted of several drugs and weapons offenses in 1982, Crosby spent nine months in prison. He was arrested in 1985 for drunken driving, a hit-and-run accident, and possession of a concealed weapon and drug paraphernalia. In 2004, he was charged with criminal possession of a weapon, illegal possession of a hunting knife, ammunition and marijuana.

Crosby acknowledged his mistakes and his part in the breakup of the singing groups of which he was a part. The lyrics to a new album, he told an interviewer, are meant to describe the hurt he caused himself and others.

“I have to cop to it,” he said. “This has been my choice. [I’ve] got to take responsibility for it. I did lots of harm to myself and to other people. I’ve gone back to those people…. You go back and you find the people that you hurt and you say, ‘Look, I was crazy and I hurt you. And I’m apologizing; I’m sorry.'”

Americans spend millions of dollars a year seeing therapists who promise to help them deal with feelings of guilt, but guilt in itself is a good thing. It’s sort of a self-correcting moral compass that allows us to learn by our mistakes, correct the ones we’ve made and avoid ones we’re about to make.

Somehow, many of us have acquired the idea that we should “have no regrets,” that feeling guilt is a weakness, almost a character flaw. But society, and individually, we would be in deep trouble without a healthy sense of guilt.

“Healthy” is the key word here, of course. We may feel guilt because we’re guilty, but lots of us feel guilt about things we shouldn’t, or we fail to acknowledge the guilt, do what we can to make amends and move on.

We should not, of course, follow the example of politicians and others who express guilt so easily when they’re caught in wrongdoing. We tend to be skeptical about them because we sense that they’re insincere and that they have no plans to change their behavior or make it up to people they have hurt.

Many people blame the religion in which they were raised for their sense of guilt, rejecting the idea of sin. Others believe one of the purposes of religion is to allay our feelings of guilt. But this is another example of how perceptions differ from reality. Faith has to do with our relationship to God and each other and our feelings of guilt have little to do with what may be our guilt before God, the only guilt that really matters.

We who are searching for God should note the Bible and Christian and Jewish traditions that show that God doesn’t want us to beat up on ourselves. In the Christian Bible, there’s not a more compelling image of God than that presented in the parable of the Prodigal Son: the extravagantly forgiving and loving father of a pathetically wayward son.

Individually and as a society, we have a lot for which to seek God’s forgiveness, however. Until recently, the “Agnus Dei” or “Lamb of God” prayer in the Catholic Mass lacked meaning for me. Now, besides thinking of my own faults while praying it, I think of all the ills of the world: the mass murders, the neglect of so many people who need help, the wars and injustice in my country and around the world, all of which I share in collective guilt.

Lamb of God who takes away the sins of the world, have mercy on us.