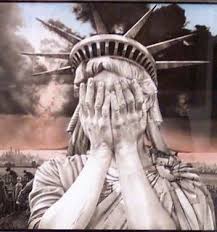 It was a summer afternoon, windows and doors were open, and our middle-class neighborhood in St. Joseph, Mo. was filled with sounds and smells.

Trucks with screeching brakes delivered ice for people’s “ice boxes” A fruit-and-vegetable hawker yelled something unintelligible in a nearby street. Crickets vied with cicadas for airtime. The aroma of newly-cut grass mixed with the putrid odor from the packing houses on the south side of town.

I was eight or 10 years old, making the year 1949 or 50. The youngest of five children, I lived with my family in a modest two-story house on Sacramento Street.

Up that street on that afternoon came an African-American man whose name I never learned. He appeared regularly in our neighborhood behind a push mower he used to cut a neighbor’s lawn somewhere farther up the street. He wore old, dark clothes and worn shoes. Though the neighborhood had long had sidewalks, he always walked in the street, seldom looking right or left, with a determined gait.

I have no idea what possessed me. I hadn’t done anything like it before, but I hid on the side of our house and yelled the “N” word.

At that moment, my mother was in our living room, close to the front door. She shot out of the house, found me and gave me a hard smack across the face.

“Don’t ever let me hear you say that word again,” she said, adding something about the man being a hard worker and deserving respect.

This all came back to me recently in reading about the demonstrations, counter-demonstrations and vehicular homicide in Charlottesville, Va. and the violence around the country against people of color, Jews, Muslims, gay people and others who “aren’t like us.” The people behind the violence are sometimes depicted in the social media as “poor, white trash,” once again giving the poor a bad name.

More about my mother, Edna Carney, the poster child for a poor, white person who exemplifies tolerance and open mindedness. Her father abandoned my grandmother and six children when my mother was a child. My grandmother was left to fend for herself, and as my mother told it, would have been in worse straits if not for a kindly priest at their parish church in Kansas City, Ks.

As it was, my grandmother put food on the table by taking in other people’s laundry, including the priest’s and people the priest referred to her.

So my mother grew up poor, just how poor I didn’t realize until not many years ago when I saw a picture of her as a child with three of her sisters. They wore worn, soiled clothes, appearing like children depicted in economically depressed places like the dust bowl or Appalachia.

Not Ignorant or Foolish

My mother had only eight years of formal education, having to help my grandmother and go to work at a young age. But she wasn’t ignorant and certainly not foolish. A devout Catholic, she put into practice what she learned from her faith, especially about how to treat others.

I was always impressed about how open and friendly she was. Everyone was a friend she may never have met. I’ve always wished I were more like her.

Edna Carney liked and repeated to her children a commonly heard maxim of her era: “If you can’t say something good about somebody, don’t say anything at all.”

What a simple lesson. It suggests the respect due others simply because they are fellow human beings, before we know anything about them.

If the lesson is so simple, why do so many of us miss it?