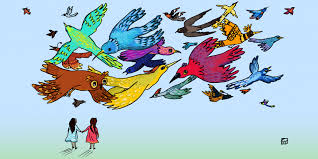 Friendship Next to Godliness?

My lifelong friend, Fr. Gerald Waris, recently paid a visit to my wife, Amparo, and me and that got me thinking about the significance of friendship.

Though most people call Gerald “Jerry,” I grew up listening to his family call him by his formal name and that stuck with me. His family moved “across the alley” from my family when we were both about four years old.

We played endless games with dozens of neighborhood kids and had seldom-bitter arguments about sports rules and “facts,” in which wildly exaggerated statements like “I’ll bet you any amount of money you want to bet” could be heard.

We attended primary and secondary schools together and four years each of college and graduate studies in theology. Despite separations, including my nearly four years out of the country, our friendship has thrived.

While he was here, we recalled the game we played years ago with friends in the lobby of a hotel in Dublin. We told them we knew each other so well we could read each other’s minds, and to prove it, played a version of the game “black magic.”

An Object in the Room

Then the partner who has stayed in the room points to an object that is black and asks if that’s the mystery object. The other partner says “No” to that but “yes” to the next object named, and that, of course, is correct. That pattern is then repeated until the audience gets bored.

Gerald and I had a twist on the game, however, memorizing beforehand four or five colors besides black that we would name in succession before the mystery object.

That left the audience puzzled until one of them said to Gerald: “When Tom returns to the room, name that sofa and do it first,” making it impossible to use the second-to-last object in a series to name the correct object. But I had an intuition about it and when I returned to the room and Gerald asked, “Is it the sofa?” I correctly answered “yes.”

Laughing about it during his recent visit, we agreed that we were beginning to believe our own claim about reading minds.

David Brooks, the New York Times columnist, wrote about friendship in a recent column. Pointing to the “transformational power of friendship,” he writes that “your friends are not just by your side, they get inside you.

These are some of the reasons that parents are concerned about their children’s friendships. They understand that friendships help shape who we are and how we act.

Delighting in the Friend’s Company

But apart from this, Brooks points out, most of us enter friendships because we simply delight in the friend’s company, and that brings me to what all this has to do with the search for God.

It’s that friendship is next to godliness. In John’s gospel, just after giving his disciples the “commandment” to “love one another as I have loved you,” Jesus reminds his disciples that he calls them friends, not just disciples. That, says one commentator, “captures the essence of John’s depiction of the disciples.”

The point is that “friendship” is one way to describe what is, or could be, our relationship to God. We can simply delight in his/her company. Jesus even more often describes it as a parent-child relationship. Either way, in my view, a good relationship to God and others is the key to “the good life.”

Thanks, Gerald, for helping me see it that way.