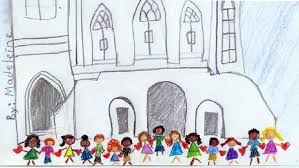 I can’t believe it’s been five years since the murder of nine people by a white supremacist as they prayed at the end of a Bible study at Emanuel AME Church in Charleston, S.C.

I recall writing a blog about it shortly afterward. Its five-year anniversary was observed recently in the midst of national outrage over the killing of George Floyd in Minneapolis.

For those of us who are searching for God, the church killings were absolutely bewildering. What did those people do to deserve to die? Weren’t they just studying the Bible and praying? What kind of twisted mind would see them as threats?

A Threat to White Supremacy

The answer, of course, is that it had nothing to do with what they did or didn’t do. It had everything to do with who they were. They were black and they represented, as all black folks do, a threat to white supremacy. People of races and religions other than the majority have experienced similar treatment.

Indeed, it was nothing “personal.” The convicted murderer, perhaps thinking himself a devout person, participated in the Bible study before shooting everyone. Dylann Roof targeted the church because of its importance in black history. The church, and its members, represented all he didn’t like – which amounted to not being white – about black people.

According to the Washington Post, “Roof confessed to FBI agents, did not contest his guilt and has even said he would do it again.” In an online rant before the shooting, he said his goal was “to trigger a race war.”

For many, the most unbelievable part of this story is the reaction of some of the victims’ loved ones. For 16 years, Anthony Thompson, 68, was the loving spouse of Myra Quarles Singleton Thompson, who was shot eight times. He was one of the victims’ relatives who made international news by offering forgiveness to the gunman during a bond hearing just two days after the shooting.

The Parable of the Sower

The day of the shooting, says the Post, “was the first time that Myra, who had just earned her license to be an AME minister, led the church’s Wednesday Bible study. She spent all afternoon at the table in their den putting the finishing touches on her outline to guide a discussion about Mark 4. That is Jesus’ parable of the sower.

“We have to look beyond our pasts,” Anthony said, recounting the traumas of slavery and Jim Crow. “Like [the apostle] Paul said, I put the past behind me and moved forward toward the mark. And the only way to move forward toward that mark, the prize, is to find a way to reconcile with one another.”

Anthony said he was disturbed by some looting after George Floyd’s killing in Minneapolis, but he was heartened to see so many white people, and youths, among the largely peaceful protests against racism and police brutality.

Too Quick to Forgive?

He told the Post that even five years later he hears critics saying he was too quick to forgive such a heinous crime. But he explains that choosing to forgive does not mean he dismisses, condones or excuses his wife’s murder. Instead, “he’s unshackling himself of the burdens of distress and despair while acknowledging the foundational Christian truth that we’re all sinners.”

Roof was sentenced to death in 2017. Anthony opposes the death penalty. “He needs the opportunity to repent,” Anthony explained. “Sitting in jail for life will give him the opportunity to do that. …No one, not even Dylann, is irredeemable,” he says.

But Anthony’s view is undoubtedly the view of the God who “causes his sun to rise on the evil and the good, and sends rain on the righteous and the unrighteous.” It’s the view of the father of the prodigal son, who sees no one as irredeemable.

How can we who search for God do any less?