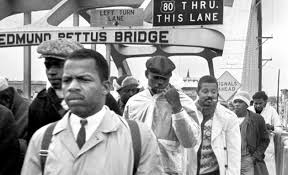 Courage and the Search for God

In watching the media coverage of the death of civil rights leader, non-violence advocate and Congressman John Lewis, I was moved by the courage shown by Lewis and other “trouble makers” in confronting the racist practices and laws of 1960s America.

How many of us would be willing to defend our views in the face of hatefulness, clubs, vicious dogs, fire hoses, spitting and hitting and all the indignities foisted on people like Lewis who decided that enough was enough?

It reminded me of other courageous people I admire, like Thomas More, a lawyer, who in the 16th century opposed and was executed by the infamous Henry VIII; Franz Jaggerstatter, the Austrian layman who stood up to Hitler’s killing machine and was also executed for his trouble; and Dietrich Bonhoeffer, a brilliant Lutheran theologian and anti-Nazi who also paid with his life.

Motivated by Their Faith

Like Lewis, a Baptist minister, all of them were motivated by their faith. And they spoke and wrote eloquently about how faith can result in the kind of courage of which they may not have believed themselves capable.

We may ask ourselves if we have that kind, or any kind, of courage. Who knows? For most of us, in any case, it’s the daily small acts of courage that matter. It’s acting despite our fears, determined to do the right thing.

“We decided, with great fear and anticipation, we would desegregate downtown Nashville,” he said. “I was scared to death when we made that decision. I knew nothing about how we were going to do this. I had never done it before. But we planned the strategy.

“Now, John Lewis becoming ordained as a Baptist minister — something else was happening to John in those early years. John saw the malignancy of racism in Troy, Alabama. There formed in him a sensibility that he had to do something about it. He did not know what that was, but he was convinced that he was called, indeed, to do whatever he could do, get in good trouble, but stop the horror that so many folk lived through and in, in this country, in that part of the 20th century.

“I maintain that many of us had no choice to do, but we tried to do, primarily because at an early age we recognized the wrong under which we were forced to live, and we swore to God that, by God’s grace, we would do whatever God called us to do in order to put on the table of the nation’s agenda this must end.”

What They Believe Is Right

I believe more people than we might think, believers and non-believers, show courage in their daily lives, even though we might think courage is a thing of the past. People are still “speaking truth to power,” sticking up for themselves and others who are wronged, clinging to what they believe is right.

Usually, it’s done in quiet and small ways when people gently take the side of abused supermarket employees, tolerate the minor shortcoming of the restaurant drive-through attendant or when we show disapproval of racist or sexist talk or actions in the office or on the factory floor.

“If we would honor and celebrate John Lewis’s life,” said Rev. Lawson, “let us then recommit our souls, our minds, our hearts, our bodies, our strength to the continuing journey to dismantle the wrong in our midst and to allow a space for the new Earth and new heaven to emerge.”