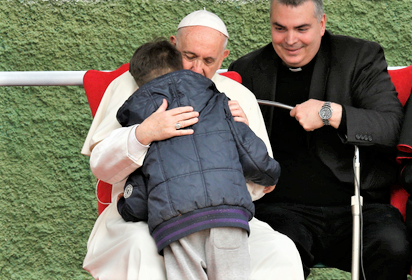 Can Non-Believers Be “Saved?”

I recently came across a moving story about a boy who was among children chosen to ask Pope Francis a question during the pope’s visit to a poor neighborhood on the outskirts of Rome last year.

The boy stepped to the microphone but couldn’t bring himself to ask his question. After a long pause, he said, “I can’t.” The pope asked him to come whisper the question in his ear, then asked the boy’s permission to repeat the question out loud.

“A little while ago, my father passed away,” the pope quoted the boy, Emanuele, as saying. “He was a non-believer (but) … he was a good man. Is my Dad in heaven?”

As a point of clarification, the pope first gently responded, “God is the one who decides who goes to heaven.” Then, just as gently, he asked Emanuele, “What is God’s heart like with a Dad like that? What do you think? … God has a Dad’s heart. …Does God abandon his children when they are good? ”

For a cynic, or even a theologian, this may not be a satisfying answer. But commenting in American Magazine on the Pope and Emanuele, Jack Bentz, S.J., notes that it’s an example of Pope Francis “going pastoral. He is a good shepherd holding the littlest lamb close to his heart.”

Bentz asks believers who have a problem with God receiving an atheist into heaven: “What kind of God are you thinking of? Can you imagine God checking the catechism or even Scripture to see who can and cannot be allowed into heaven? God is love, and it’s very hard for Love to be unloving.”

Many atheists may not like the question about heaven, of course, but it’s a valid one for a believer. When it comes to atheists and agnostics, believers often must walk a fine line between militancy and dereliction of their charge to bring people to God.

Despite notable historical lapses in their treatment, Judeo-Christianity sees non-believers as children of God, loved by God as much as believers. Indeed, some of Jesus’ stories, such as the parables of the Prodigal Son, the coins and lost sheep, seem to show God’s preference for them.

On the other hand, believers should be ready to defend their beliefs – without the militancy that defies God’s universal love.

Comedian Stephen Colbert interviewed fellow comedian Bill Maher, an avowed atheist, on The Late Show back in 2015. Colbert referred to Maher’s atheism and Maher noted that Colbert was “a practicing Catholic.”

“I’m a practicing Catholic but it doesn’t mean I’m good at it,” Colbert responded, adding, “…I suck at being a Catholic.” Then, casually, he invited Maher back to the church, asking him to “admit there are things greater than you in the universe, things you don’t understand.”

Replied Maher: “…There are lots of things in the universe I don’t understand and my response to that is not to make up silly stories…or to believe intellectually embarrassing stories from the bronze age…. These were men who did not know what a germ or an atom was or where the sun goes at night and that’s where you’re getting your wisdom.”

Despite the applause to Maher’s comments, Colbert – to his credit – didn’t argue. I would have been hard pressed not to, simply because Maher’s comments show little understanding of religious history, the Bible, the evolution of scientific knowledge and how people acquire wisdom.

I acknowledge, however, that Colbert’s approach was better. And it was similar, in a way, to the Pope’s in that no theological or rational arguments were exchanged. In the case of Emanuele, Francis simply appealed to God’s love for all of humanity.