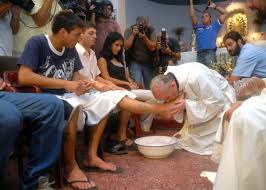 What Makes Someone, or Something, Holy?

In a 2013 blog called “The Idea of the Holy,” I wrote that for many, the word “holy” is an enigma. It’s not in our vocabulary. We don’t know exactly what it means and seldom use it.

It’s one of those churchy words that leaves many contemporary people scratching their heads. I often think of this when singing, “Holy, holy, holy…” at Mass. As a believer, I can make the words my own, but are those words, and the vocabulary of religion, meaningful to the majority of young (and many older) people today? I doubt it.

The eyes of many people, including the young, glaze over when hearing these words. The words seem to have nothing to do with their lives. They’re part of the vocabulary of religion, which, I believe, is part of what makes religion seem irrelevant. Many ask why religious people don’t speak plainly about God and faith.

Here’s the problem. How do you use everyday language to describe something that is, or someone who is, indescribable? The experience of mystics and religious people through the ages can’t be adequately expressed in everyday language. So words and phrases were invented that the inventors believed better express the experiences.

When applied to God, the word “holy” has meant the idea that God eludes comprehension. He/she just doesn’t fit into our rational categories, being too much for our puny minds to grasp. For most religious people, God is so unlike us (except for Jesus, believed by most Christians to be God and human) and so unlike anything we have experienced, we don’t have an adequate vocabulary to describe him/her. “Holy,” in whatever language it was first used, was the best they could come up with.

So the word may be archaic, but the idea isn’t. When you apply “holy” to humans, however, what are you talking about? And what about things: churches, statues and images?

Webster’s isn’t much help. Its definitions apply to God, except for one that says “holy” is “having a divine quality.” And in my view, that pretty much hits it on the head: People who are God-like, who have a spark of the holiness of God, are “holy.” And things that represent God or holy people are analogously, holy.

Rejoice and Be Glad

Pope Francis has just written a new essay called “Rejoice and Be Glad,” which is about holiness and how to attain it. (Contrary to our image of “holy” people as sad and joyless, Francis is saying that people who are holy are also happy, even joyful.) He has a section called “the saint next door.”

He says being holy isn’t optional for people searching for God. “Be holy as I am holy!” says the Bible in a couple of places.

I’m sure the pope isn’t under any illusions about whether people will be chomping at the bit to read his document. He knows how hard it is to get people interested in such topics. Nonetheless, people who are serious about the search for God should care about the language of traditional religions and even read the Pope’s document.

Whenever we learn about something – literature, art, physics – we have to learn the language of that pursuit. And although religion is a relationship, with God and others more than anything, there is a certain amount of learning involved in faith.

And as with countless spiritual writers throughout history, Francis believes it’s hard to be God-like without a certain amount of silence and opportunity for thoughtfulness.

No Room for God’s Voice

“The presence of constantly new gadgets, the excitement of travel and an endless array of consumer goods at times leave no room for God’s voice to be heard,” he writes. “We are overwhelmed by words, by superficial pleasures and by an increasing din, filled not by joy but rather by the discontent of those whose lives have lost meaning.

“How can we fail to realize the need to stop this rat race and to recover the personal space needed to carry on a heartfelt dialogue with God? Finding that space may prove painful but it is always fruitful. Sooner or later, we have to face our true selves and let the Lord enter.”

But for the Christian, Francis insists that holiness doesn’t admit of a “Jesus and me” approach, in which we focus on our own situation, trying to develop a relationship with God apart from others. Eventually, people searching for God will feel the need to worship and do so in community.

And at the final judgment, Francis points out, Jesus’ criteria for holiness will be used: “I was hungry and you gave me food, I was thirsty and you gave me drink. I was a stranger and you welcomed me.”